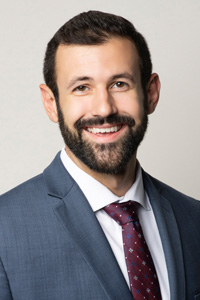 Mobile personal injury attorney Chase Davis was born and raised in Mobile, Alabama. A valued member of Dean Waite & Associates’ legal team, Chase attended Murphy High School, where he was a member of the International Baccalaureate Program and graduated in the top 5 percent of his class. After Murphy, Chase left the Gulf Coast to attend the prestigious University of Chicago, ranking #15 on the U.S. News & World Report’s list of Best Global Universities. At Chicago, Chase played 4 years of Basketball for the Maroons in the UAA conference and was inducted as a member of University’s athletic lettermen’s organization, the “Order of the C”.

Chase always wanted to return to Alabama, and law school afforded that opportunity. After graduating from the University of Chicago with a Bachelor’s degree in Political Science, he moved back to warmer weather in Montgomery. Chase attended Faulkner University’s Thomas Goode Jones School of Law, where he was the recipient of the school’s Eagle Scholarship, awarding him a full-ride merit-based scholarship. Chase earned his Juris Doctorate degree from Jones before moving back home to practice law in Mobile.

Since moving back to Mobile and joining the Alabama State Bar, Chase has practiced exclusively personal injury law with a focus on litigation. During the course of his practice, he has represented countless injured claimants, and understands the life altering effects of a serious injury. Chase has recovered millions of dollars for

his clients, always aimed at fully compensating them for the injuries they sustained through no fault of their own. Chase is admitted to practice in all state and federal courts in Alabama and Mississippi. Chase enjoys the courtroom and has extensive trial experience, resulting in multiple six-figure verdicts for his clients. Recently, The National Trial Lawyers named Chase as a member of its Top 40 Under 40.

Chase has a firm belief that God has graced each person with a particular set of gifts and talents. He believes that those blessings reach their fullest potential when utilized to help others. Chase has always been active in this pursuit, from volunteering for Boys & Girls Club camps in Argentina and Chile, to using his basketball background to raise money for St. Jude Children’s Research Hospital in cities along the Gulf Coast. As an attorney and counselor, he’s thankful that God has put him in a position to continue helping individuals and families, often dealing with life-altering and traumatic injuries, right here in his hometown of Mobile.

Chase currently lives in Mobile, with his wife Madison, and their twin boys. He and his family attend church at Mars Hill.