The Dangers of Motorcycle Lane-Splitting 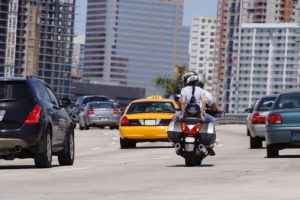 In 2016, California became the first state to legalize motorcycle lane-splitting. In many ways, that was a formality. Lane-splitting had been common practice there for as long as anyone could remember. However, similar legislation has not done well outside California. In the past five years, state legislators across the country have unsuccessfully promoted bills to legalize lane-splitting in 15 states, according to the American Automobile Association.

In Alabama, the law is clear - lane-splitting is not permitted. However, some bikers are either unaware or choose not to follow this law, and it's important to understand the consequences.

Also known as lane-sharing or white-lining, lane-splitting occurs when a motorcyclist rides between two lanes of stopped or slower-moving traffic. Some bills legislating this action in states other than Alabama were written by legislators on the behalf of a constituent or motorcycle group, and didn’t get too far in the state legislatures. Some bills succumbed because of opposition from law enforcement agencies. Most of the failed bills would have required that lane-splitters travel below a certain speed and not go much faster than the cars around them.

In 2010, Arizona legislators passed a bill to allow a one-year lane-splitting pilot program that went on to be vetoed by then-governor Republican Jan Brewer, who had concerns about its impact on safety and whether motorists would have enough time to be educated about the changes.

Even advocates for lane-splitting admit that drivers might be startled if a motorcycle suddenly appears beside them, which is why it’s important for any state that legalizes the practice to issue guidelines for bikers and offer a public awareness campaign for motorists.

The National Highway Traffic Safety Administration (NHTSA) admits there isn’t a great deal of data on the safety of lane-splitting, but did add that the practice is common in Canada, Australia and France, and worthy of more study, “because it offers a means of reducing congestion in addition to possible safety benefits.” The agency calls lane-splitting an option that “can provide an escape route for motorcyclists who would be otherwise be trapped or struck from behind.’’

Significant safety concerns have been raised about lane-splitting

A 2015 study by the University of California Berkeley found that lane-splitting appeared to be a “relatively safe’’ strategy when done in traffic moving at 50 m.p.h. or less, and if motorcyclists don’t exceed other vehicles’ speeds by more than 15 mph. The study also added that lane-splitting bikers were less likely to suffer torso injuries or die in a crash than those who didn’t split. However, it's important to note that some bikers may not respect the guidelines suggested by the study.

Meanwhile, the traffic safety consultant of the Governors Highway Safety Association, which represents state highways and doesn’t take a political position on lane-splitting, called it “a very risky activity.’’ The Berkeley study’s finding reported that between June 2012 and August 2013, of the motorcyclists involved in nearly 6,000 collisions in California, 17 percent had been lane-splitting.

In Alabama, the safety of motorcyclists is a top priority. Lane-splitting is against the law, and we urge car drivers and bikers alike to obey traffic laws. In the event that you have suffered an injury in a motorcycle accident, you should consult with experienced motorcycle accident attorney as soon as possible.