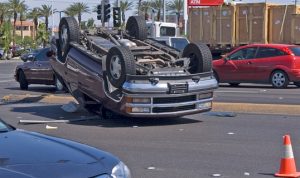 We’re seeing more SUVs on the roads of Mobile. While the reduction in gas prices may be a factor, many drivers are also attracted to the high ground clearance, sporty appeal and increased horsepower of SUVs.

But according to the Insurance Institute for Highway Safety Highway Loss Data Institute (IIHS, HLDI), these vehicles are the more likely to be involved in rollover accidents.

Where the danger exists

SUVs are most likely to roll over because of their taller structure and higher center of gravity. While modern safety features – such as electronic stability control – can help prevent rollovers, many vehicles are still at a high risk of being in a rollover accident.

Rollover accidents usually happen when a vehicle skids or slides sideways after a driver loses control. While in motion, a vehicle can be tipped over once it comes in contact with a curb, guardrail, or other low-lying object in the roadway. Rollovers can also happen when a driver navigates a curve or turn at an unsafe speed.

Other factors that can contribute to a rollover accident include:

In many cases, vehicle occupants are ejected during a rollover. In order to mitigate the risk of sustaining severe or life-threatening injuries, IIHS urges drivers to wear their seat belts. Roughly 67 percent of people killed in rollover accidents in 2016 weren’t wearing seat belts.

Even if you’re wearing a seat belt, you are likely to sustain injuries. However, you may recover with medical treatment and rest. Crash victims are likely to suffer from:

Who is liable in a rollover accident?

Finding out who was responsible for causing your rollover accident may take the investigative power of an experienced Mobile car accident attorney. Responsible parties can include:

Attorney Dean Waite can examine all factors that led to your crash. We’ll use any evidence we find to help you build a strong claim and hold negligent parties accountable. To learn more about how we can help you, contact our law office today.