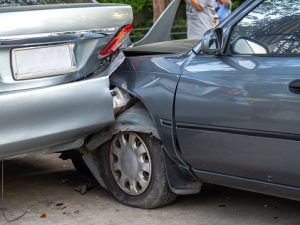 Most car accidents are caused by human error. That's especially true of rear-end collisions, which generally happen when a motorist is distracted, fatigued, following too closely or driving too fast to stop in time. As such, a potentially powerful way to eliminate rear-end accidents is to alert drivers of the risk of a collision before it happens.

That's exactly the purpose of forward-collision warning (FCW), an advanced safety feature highly recommended by Consumer Reports. FCW systems use a variety of means to monitor driving speed, locate object ahead and warn the driver that a collision may be imminent.

Currently, these systems are still being refined, and they're sometimes prone to false alerts. However, the risk of false alarms is far outweighed by the safety advantages. According to Consumer Reports' data, the majority of owners are satisfied with their FCW systems, and 36 percent of those surveyed said that forward-collision warning saved them from accidents.

Another safety feature that is gaining increased traction is automatic emergency braking (AEB), a system that automatically applies the brakes when a collision is imminent - or adds more braking input when the driver isn't applying enough to avoid the collision.  The National Highway Traffic Safety Administration plans to include AEB as a recommended technology beginning in model year 2018, with the goal of eventually making it standard on all vehicles.

Other key innovations that can help to reduce rear-end collisions include adaptive cruise control, which automatically maintains a safe following distance; fatigue warning systems, which alert drivers when they detect inattention or drowsiness; and electronic stability control, which adjusts braking and engine power to make sure the vehicle responds properly to steering.

Many rear-end collisions are caused by motorists who don't pay close attention to the road in front of their vehicles, whether due to texting, eating, adjusting the radio or doing something else behind the wheel. Some safety systems work by alerting the distracted driver, hopefully in time to avoid an accident. Others take automatic control of the vehicle, applying the brakes when the driver isn't doing enough.

Even in cases where safety systems don't do enough to avoid contact, they can prove to be hugely beneficial. Applying the brakes before an accident can greatly reduce the vehicle's speed and thus the force of the impact, significantly reducing the risk and severity of injury as well as property damage.

Motorists and automobile manufacturers alike have a responsibility to keep the roads safe, and when they do not do so, they should be held accountable. These new systems are on the market today because injured motorists and their advocates have shown the manufacturers that safety needs to be their highest priority.